Sleeveless Records is delighted to announce the release of

From Bohemia to Wessex: Cello Music from the Twentieth Century. 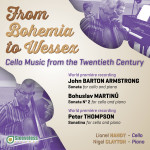